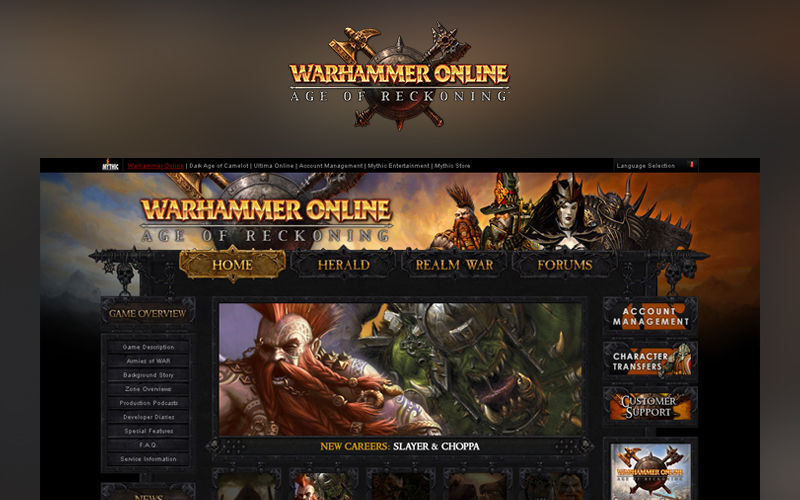 Warhammer Online was an MMORPG released by Mythic Entertainment (EA Games) in September 2008. At its peak, the game had more than 800,000 registered players across servers in North & South America, Europe, Asia, and Australia and sold more than 1.2 million copies. Due to a license agreement coming to an end with Games Workshop, the game shut down on December 18, 2013.

I was brought on as the first digital designer for Mythic Entertainment. My role as Web Design Lead was working on the UI as well as front-end development (basic HTML/CSS/JS templates) for just about all of Mythic’s websites from 2007–2010.

When I joined the studio, the positive energy at Mythic was through the roof, and work was already underway on the Warhammer Online game, but the web properties were still to be fully defined—just some basic pages for the game were in place since the game was announced.

The first project I was tasked with was getting the Warhammer Online web properties ready for launch of the game, which consisted of three sections: Home (marketing and game information), Herald (community blog), and The Realm War (in-game related content accessible when the user is logged in). The task at hand was to figure out how to lay these out into a cohesive experience and then design the layout. On top of that, I worked hand in hand with the back-end developer for the entire process, as writing the front-end code was also under my purview.

There was no set direction for the web properties. Each team had previously worked on their section without consulting the others, so the two existing pages had their own looks. To kick off the project, I began with talking with the teams that would have a hand in each component of the experience:

After talking to each of the teams and gathering requirements, I started to explore some possible directions for the core look of the sites.

My goal was to leverage as much in-game (pre-approved) assets as possible so that:

I started with the Homepage and the Herald first because they were already live and visited by potential gamers. After those two pages were established, I’d work on the Realm War section (which wasn’t needed until BETA and Launch). A few iterations and quite a few meetings later, I landed on the initial look for each of the sections that we would use for the launch of the site.

Once core layouts were far enough along, I transitioned to development. Since I was both the designer and front-end developer, I was able to take less time working out every interaction and state of an asset and work on it in code. This helped decrease the amount of time spent on design and get the coded front-end pages to the back-end developer more quickly. I worked primarily in Eclipse, so the HTML pages were easier to hand-off to the developer, plus it allowed us to check in/out pages so work wasn’t lost or overwritten.

With all hands on deck, after I got ahead of my milestones, I was able to assist other teams and needs, including:

Release was handled in stages: Pre-BETA, BETA, and Launch.

Pre-BETA release consisted of the Homepage (marketing site) and the Herald (community blog). These were front-facing, and since the game was still not released, gamers were able to get more information on the game each week as new information came out.

Once the game entered public BETA, we launched a BETA for the Realm War. Gamers in the public BETA could login and test out viewing their Character information as well as RvR Leaderboards for their server. Later in BETA, when Guilds were introduced for testing, we also added a way for users to check them on the site. The RvR status page was the last to be implemented and the biggest draw for the site, allowing gamers to check the status of various realms, battlefields, and their capital cities. Having the time to beta-test the realm war component of the site was a huge help and the community was fantastic with their feedback.

When the site went live for Launch, we had a few design adjustments to make:

All in all we had a fantastically smooth launch experience, not only for the website but for our game and servers. Great planning and execution by the teams!

The first few weeks after Launch, time was spent addressing bugs and adding assets that didn’t make it into the Launch version of the game, which were mostly found on the Realm War sections of the site. Then I got to work on making some UI improvements across the board, which included:

With the game released, we were finally able to get on the Art team’s schedule. I worked with them to create a unique composite background image, and we were able to finally get rid of the “hill” design. Some characters from both major factions were added to the header as well. Following the release of the game, Forums were added to the site, so it gave us some time to rework the navigational design as well.

I worked with the game and marketing teams to create a New Player Guide that lived on the Homepage. This was a step-by-step multi-page section that would guide players through the entire game experience, from creating an account and character to end-game RvR battles. Again, I tried to use as much in-game style assets as possible.

UI changes were designed but never implemented for Realm War page redesigns for Character, Guild, and Leaderboard information. Also planned was the ability for players on the web to chat in-game with their guild-mates and an iOS companion app, but both features were scrapped due to time/resources.

Interested in more? Check out all my work for Electronic Arts / Mythic Entertainment.